Although this property was privately owned throughout most of the twentieth century, it has remained relatively undeveloped and has seen little public use since the 1980’s. Upland acreage is a mixed forest habitat that sustain many rare and unique ecosystems and species. Bald Eagles, deer and coyotes call the island ‘home’, along with over 50 species of birds, bats, and small amphibians. The marine waters are rich in sea life. From the shoreline you can watch curious harbor seals and sea otters. Rocky beaches offer a secure support for intertidal life. The Fidalgo Island parcel contains a 3.4 acre tidal lagoon and associated wetlands; a habitat deemed crucial in the recovery of the threatened Puget Sound Chinook salmon. 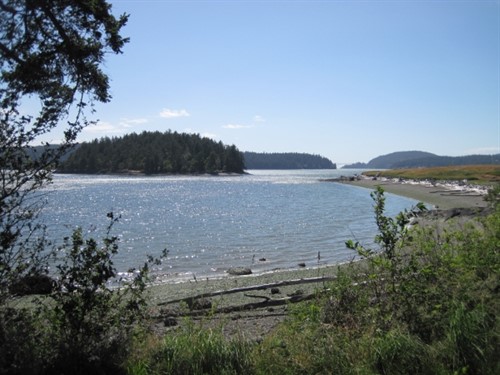 Kukutali Preserve has an unusual, and occasionally contentious, history. Kiket and Flagstaff Islands were part of the land reserved by the Swinomish people in 1855 when the Treaty of Point Elliot established the reservation system. The Dawes Act of 1885 allotted the property to the Clark Chubahud family. Historical documentation indicates that the Chubahud’s sold the property in 1928 to a consortium of Skagit County residents who intended to use it for summer recreational purposes. Gene Dunlap, one of the original purchasers and a prominent businessman, came to acquire sole ownership of the property, and in 1952 he began construction on his lavish, contemporary home on the southwest end of Kiket Island. The area remained in the Dunlap family for several decades until Seattle City Light and the Snohomish Public Utility District No. 1 purchased the property with the intent of building a nuclear power plant on Flagstaff Island. After several years of public and tribal dissent stemming from environmental concerns, the plans for the nuclear site were abandoned. In 1982, Seattle City Light sold the Kiket property to Seattle developer, Wallace Opdycke. Although treaty rights guarantee tribal ownership of the beaches up to the mean high water line, during Opdycke’s ownership all access to the Kiket Island beaches and nearshore areas was assertively denied.

On May 17, 2010, a historic co-management agreement was signed between the Swinomish Indian Tribal Community and the Washington State Parks and Recreation Commission to jointly acquire Kiket Island (including Flagstaff Point) and an adjacent nine acre parcel on Fidalgo Island, and to work in partnership to develop, operate, and maintain the islands and associated tidelands as a unit of Deception Pass State Park. Scientific research work commensed immediately and lead the to the development of the Kukutali Preserve Conservation Mangement Plan that was in turn adopted in whole into the Kukutali Preserve Master Management Plan.

On June 16, 2014, Kukutali Preserve was officially opened to the public, marking the success of the first four years of a significant and mutually beneficial pact between the Swinomish Indian Tribal Community (SITC) and the Washington State Parks and Recreation Commission. More importantantly, it symbolizes a coming of full circle for the Swinomish people, who now have access to traditional lands and tidelands and can, once again, guide the stewardship and protection of Kukutali for future generations.

ABOUT THE NAME AND LOGO

Our Kukutali Preserve logo is a representation of a cattail mat creaser. Creasers were small hand tools with a triangular relief notch on the bottom. The creaser was used in conjunction with a mat needle to create a scoring across many cattail leaves to prevent the sewn cattail leaves from splitting. The artist’s rendering by Swinomish Tribal member Todd Mitchell of the creaser includes two heads to represent the Tribe and WA State Parks, the two entities that have come together to manage this unique area.