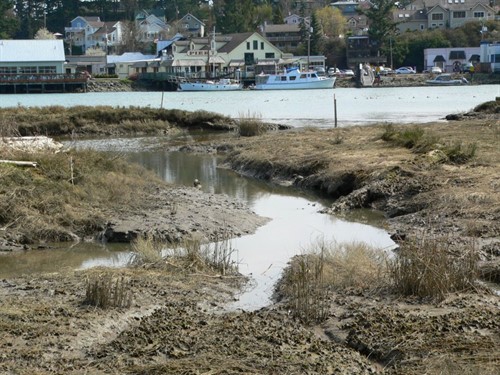 Without control, Spartina anglica will colonize and degrade major portions of the more than 2900 acres of intertidal lands within the Swinomish Reservation. It often out-competes native vegetation in existing salt marshes where, unlike native plants, it provides little forage benefit for native fish and wildlife.  It can colonize many previously un-vegetated mudflats, where it eventually forms monotypic meadows that accumulate sediment.  Spartina modifies the hydrology of estuaries by elevating some intertidal areas and causing increased tidal flooding in others due to decreased intertidal volume.  Spartina invasions lead to reduced plant diversity and displacement of invertebrates, which are a major food source for shorebirds, waterfowl, and juvenile salmon.   Infestations eventually destroy shellfish beds directly by converting them to marsh and indirectly by increasing flooding regimes.

How is Spartina eradicated?

In 2008, in cooperation with Skagit County and the Washington State Department of Agriculture (WSDA), the Swinomish Tribe used an integrated weed management approach to survey and map Spartina infestations on the Reservation, then chemically treat, mow, or physically remove Spartina plants on approximately 130 acres of infested reservation intertidal lands.  In the past several years, an environmentally safe, effective herbicide (an aquatic imazapyr formulation) has been approved for use on Spartina species in Washington State. Given the Spartina control experience of state and federal agencies with this herbicide, and the demonstrated low environmental impact of the new herbicide on non-target vegetation and wildlife, the Swinomish Tribe has transitioned from a highly labor intensive and costly mechanical control strategy to a primarily herbicide-based eradication strategy.

In 2009 the Tribe used its own qualified aquatic herbicide applicators and equipment to treat all known populations of the substantially smaller amount of Spartina remaining after the 2008 treatment season.  In the 2010 season the total amount of Spartina anglica on the Reservation (based on the total amount of herbicide mix used for treatment) was 90% less than in the 2008 treatment year. Based on the efficacy of the new herbicide and the in-house capability to treat all infested areas several times in a control season, the Tribe expects to essentially eradicate Spartina infestations on the Reservation over the next few years of treatment. Learn more » 2010 Swinomish Spartina Control Report